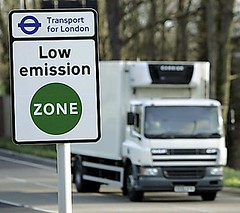 If you live or do business inside the M25, you may have heard of London’s Low Emission Zone. Up until now, it has not affected motorhomes with a gross weight of up to 3.5 tonnes – the vast majority of UK motorhomes. However, on the 3rd January 2012, that will change for vehicles registered before 2002.

Here’s an overview of the current and future rules (all comments apply to diesel-powered motorhomes – petrol/LPG vehicles are treated differently):

Motorhomes With A Gross Weight of Under 2.5t

Motorhomes with a maximum permitted (gross) weight of under 2.5t are currently classified as cars and are exempt from the LEZ. This will continue under the 2012 rules.

First registered after 1st January 2002: You already meet the LEZ standard and will continue to do so under the 2012 rules.

(Somewhat controversially, these rules also apply to motorhome owners who live inside the LEZ.)

Motorhomes With a Gross Weight Of More than 3.5t

Registered between 1st October 2001 and 30th September 2006: Currently compliant. Will be non-compliant from 3rd January 2012.

First registered on or after 1st October 2006: Compliant now and will continue to be compliant under the 2012 regulations.

What To Do If Your Motorhome Becomes Non-Compliant

If you wish to enter the LEZ with a non-compliant motorhome, you have three choices:

The Transport for London website has a vehicle checker that will tell you whether your motorhome is compliant now and in the future. This website also has full details of all the rules. (click here to visit the TfL LEZ website)